From the first raid on Lindisfarne in 793, the Vikings naturally took a keen interest in the north-east coast of England as this was the most accessible area from their home bases.  At that time, the land we now know as England comprised a number of independent kingdoms with Northumbria controlling the territory between the Humber and the Forth, and west to the Pennines and into the Wirral, with the Rheged (part of Strathclyde) to the west, and Mercia to the south.  From the initial raids, the coming of the Great Army in 865 saw the Vikings staying over the winter, and taking control of much of the north and east of England.  While Alfred the Great was able to hold out against them and retain control of Wessex and half of Mercia as a result of his victory at the battle of Edington in 878, much of the land between the Thames at London and the Dee at Chester was under Viking control, with their own coinage and legal system - this area became known as the Danelaw.

While Northumbria remained outside of the Danelaw at first, and the Wessex kings were able to exert renewed control over much of Mercia and some of East Anglia, a renewed influx of Vikings from Dublin brought Northumbria fully under their control, and their kingdom of York flourished for 30 years while Edward the Elder ruled from Wessex.

Perhaps the most famous of all of the Vikings in the north is Erik Bloodaxe, King of York - his tenure was short, from 947-948 and again from 952-954, but his deeds echo down through the ages.  His ability to reign has to be called into question, as he started out as King of Norway in 931 but was ousted by his subjects in favour of Haakon ("the Good") in 933.  His short rule in York gave way under the pressure of King Athelstan who finally united all of the old Saxon kingdoms into something very close to the England of today.

The legacy of the Vikings remains clear in much of Yorkshire in place names (with elements such as tarn, beck, thwaite and so on) and in dialect words such as "happen" meaning "maybe" or "perhaps", such as in "happen it will".  Perhaps the largest example of this is in the organisation of Yorkshire itself, which is divided into Ridings - literally thirds, from the Old Norse þriðjungr, which is why there is a North Riding, a West Riding and an East Riding but no South Riding, as four thirds makes no sense.

Today, York itself shows many of the placename elements, and in particular the use of "gate" (from Old Norse gata) meaning "street" is visible in many places. 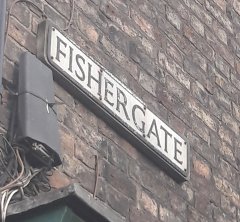 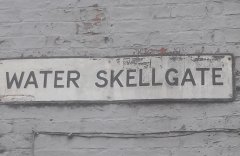